Profit for the few or the common good? 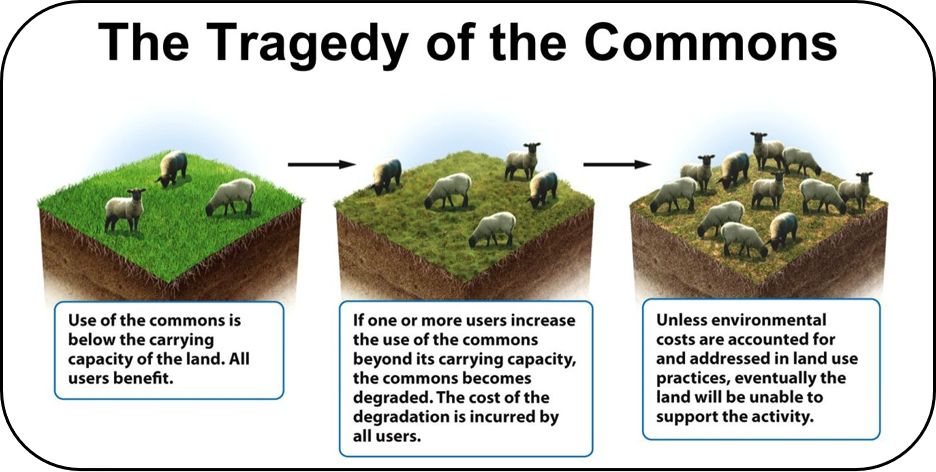 From "Meditations In An Emergency" by Asad Haider in the July, 2020 issue of The Baffler on page 6 :

THE WORLD, WE ARE TOLD, is in crisis. We hear of medical crisis, financial crisis, and crisis of leadership, suggesting that the scope of the term is almost unmanageably broad. Now these crises converge in the suspension of the everyday social order sparked by police violence and the uprisings against it. In these various converging crises, we are called upon to make decisions.

The thing to be understood is that these things are not "crises" in the sense of the unexpected or outside of human control. These crises have been human made right here in America. They are the result of deliberate and intentional policy crafted and implemented by and for the capitalistic ruling class for the purpose of financial profit. They are the consequence of the system which we all participate in most of us unconsciously.

Americans have be clear about their values. Do they prefer money and profit or the common welfare? As things are going, we can't have both.

Posted by David G. Markham at 4:32 PM No comments:

Email ThisBlogThis!Share to TwitterShare to FacebookShare to Pinterest
Labels: The Commons 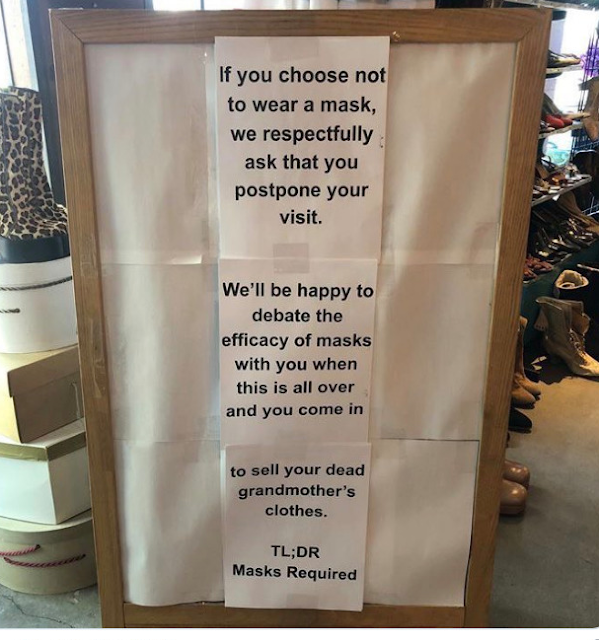 Posted by David G. Markham at 9:51 PM No comments:

Email ThisBlogThis!Share to TwitterShare to FacebookShare to Pinterest
Labels: Covid-19

Replace Columbus Day with Juneteenth as a National Holiday

Email ThisBlogThis!Share to TwitterShare to FacebookShare to Pinterest
Labels: Holidays. 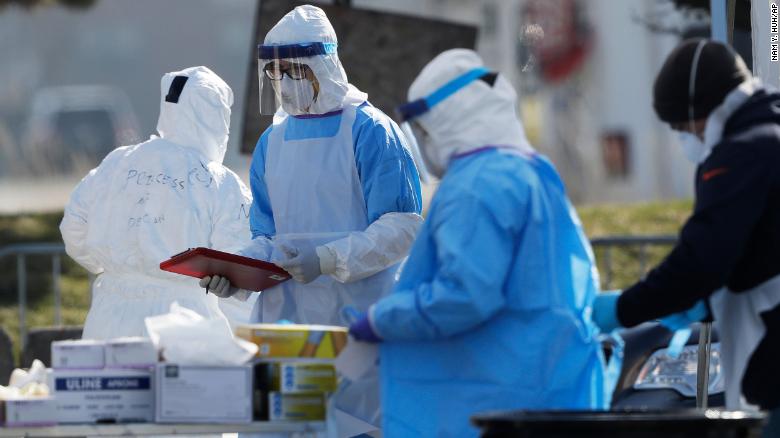 President Trump's plan to leave coronavirus testing to corporations with drive through testing didn't work out.
From CNN on 03/31/20
(CNN)As he was facing intense criticism for a lack of adequate testing, President Donald Trump announced in the Rose Garden in mid-March that the federal government would partner with private companies to set up drive-thru coronavirus testing sites.
He invited chief executives from Target, Walgreens, Walmart and CVS to the microphone and showered them with praise over the new effort. The President told attendees he envisioned consumers driving up, getting swabbed and having their samples sent off to the lab to be tested -- "without having to leave your car."
But the President's celebrated announcement hasn't come close to being fulfilled.
While these retailers have approximately 30,000 locations combined, the Department of Health and Human Services confirmed that there are only five locations from these major retailers that are currently offering drive-thru testing -- and none are open to the general public.
Posted by David G. Markham at 9:49 AM No comments:

Trumpism, Covid-19, and the failure of U.S. government to keep its citizens safe

The nation with the world’s highest Coronavirus death toll — where the first wave hasn’t even plateaued or slowed yet — reopening already. Seeing new spikes across half its states. What the?

America is about to show the world what a worst-case scenario for Coronavirus looks like.

The Trump administration has bungled Coronavirus unbelievably badly. Drinking bleach, it turns out, isn’t a cure. But it’s about to get so, so much worse.

Michael Lewis wrote about "the fifth risk" in his book with the same name, The Fifth Risk, which was published in 2018. The five risks to national well being and safety are nuclear accident, nuclear war, failure of energy innovation, failure of electrical grid, and governmental incompetence and mismanagement. Americans have arrived at the point of failed government because of their inability to elect competent executives to management their government.

The cult of personality has taken precedence over competence in their selection criteria and the consequences are devastating for the quality of U.S. national well being.
Posted by David G. Markham at 10:12 AM No comments:

Rebellion against Trumpism in the United States influenced by a perfect storm.


On June 14, 2020 Chris Hedges interviewed Glen Ford about the protests in American streets since the killing of George Floyd by police in Minneapolis. When Chris asked Glen Ford about his understanding of why the American people are rising up with this particular killing of a black citizen Ford stated that four social conditions have come together at the same time in a perfect storm: the Covid-19 pandemic, economic melt down, the Bernie Sanders presidential campaign giving people hope in the realization of progressive ideas, and the authoritarian, white supremicist Trump presidency.

The police action and military action to quell the protests is the beginning of a fascist police state in the United States. Whether in Hong Kong, South America, North Korea, China, Russia, the 1% using police and military power to maintain power under the guise of "law and order" is a common governmental strategy. Whether the Trumpists can continue their take over and maintain control of the governmental apparatus remains to be seen.
Posted by David G. Markham at 9:47 AM No comments:

Email ThisBlogThis!Share to TwitterShare to FacebookShare to Pinterest
Labels: Trumpism

According to The Week magazine issue on February 2, 2020, on page 36 referring to a report on Axios.com, sixty health-care companies and trade organizations spent collectively $308 million on federal lobying in 2019 up 9% from 2018. The $308 million includes $120 million from the pharmaceuticals trade group PhRMA to pay 450 lobbyists.
Posted by David G. Markham at 6:33 PM No comments:

Trump administtation attempted to disenroll over 700,000 Americans from Food Stamps on 04/01/20 but was blocked by Federal Court injunction

On Friday, March 13, 2020, Federal Judge Beryl Howell granted a preliminary injunction on new rules that would raise the bar for able-bodied adults' SNAP benefits. Under the Trump administration proposed regulations over 700,000 Americans would have lost their food stamps. 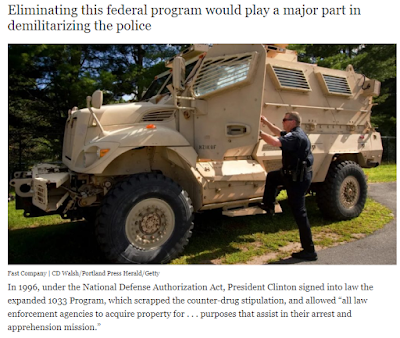 In 1996, under the National Defense Authorization Act, President Clinton signed into law the expanded 1033 Program, which gave surplus military equipment to police deparments across the United States.

After 24 years having this military equipment has contributed to more police violence against American citizens.

For more click here.
Posted by David G. Markham at 10:19 PM No comments:

What do Americans think about abortion?

A majority of Americans (59 percent) said abortion should be legal in most or all cases, and about 7 in 10 said that Roe v. Wade should not be overturned, according to the survey conducted by the Kaiser Family Foundation. Those figures have remained relatively stable through decades of debates and protests. Likewise, the poll found the public overwhelmingly believes abortion should be legal if the patient’s life is endangered (82 percent) and in the case of rape or incest (80 percent). Seventy-nine percent believe the decision is best made by women themselves in consultation with their doctors, rather than by lawmakers.

Attitudes and opinions vary between Blue and Red states. Republicans restirct abortion access while Democrats want the decision to be the pregnant woman's choice.

If Roe vs. Wade were overturned by the U.S. Supreme Court, the legality of abortion would then revert to each state. In New York State abortion is legal under state law and a reversal of Roe vs. Wade at the Federal level would not change that.

A woman's right to choose whether to continue a pregnancy would be a state's rights matter. Some states respect the women's rights to choose while some states deny her that right.
Posted by David G. Markham at 11:15 AM No comments: